The United Methodist Committee on Relief announced yesterday it has approved a $50,000 grant to Engineers in Action for 2016. This grant will go to help fund EIA’s costs related to restoring the Juckucha River in Potosi Bolivia and finding alternative water sources for three “downstream” villages: Aripalca, Calcha and Yulo, in partnership with EWB Chapters at Florida Univ, Univ of Minn., and Cornell Univ. Watch for more on this later.

It seems that whenever there is a major disaster in the world, EIA’s Executive Director, Rod Beadle, is there. He has served as a water, sanitation, and hygiene specialist in the aftermath of numerous disasters in the developing world including the Haiti Cholera Outbreak, Pakistan’s Indus River Flooding, Horn of Africa Drought, Sierra Leone Choloera Outbreak, and the Philippines Tsunami.
In 2014 when the whole world was living in extreme fear of the Ebola disease and people were being evacuated, Rod was on a helicopter in Liberia flying to the center of the region where the Ebola epidemic first broke out to build a medical clinic.
Last Sunday, Dec 13, Rod left for the Greek Island of Samos to volunteer with an international relief organization to support water, sanitation and hygiene provisions for refugee transit camps. The refugees are crossing over to the island as they flee war and strife in their homelands in places like Syria, Afghanistan, Iran, Iraq, and North Africa. He will even spend Christmas there, working to provide families with basic necessities that we take for granted like clean water, adequate shelter, and safe sanitation facilities. He truly believes “Clean Water Shouldn’t be a Luxury!”
When others run away in fear from conflict and disaster; when they turn away from victims from other countries; Rod runs toward them to do all that he can to help! That’s why I invited Rod to consider becoming our new Executive Director.
Follow Rod’s blog to see pictures and hear his thoughts during December at: http://rodbeadle.weebly.com/.

Our 2014 Annual Report has been out for awhile, I just didn’t get it sent out. We will get our 2015 Annual Report out by March. If you would like to see what we accomplished in 2014, Click below

Bruce Rydbeck is a member of board of directors of FEIA-Ecuador, which shares his experience of having worked in Ecuador for more than thirty-five years. Lives in Ecuador and he´s the international director of the potable water projects of Kawaypak Yaku, a Christian Kichwa mission. He used to be director of potable water projects for Desarollo Comunitario Vozandes. Before he´s worked in Ecuador, worked for ten years as an engineer in the United States of America. Has also worked in projects in Peru, Kenia and Colombia which had included hydroelectric plants, smaller dams, hospitals, clinics, churches and potable water systems.

The engineer Rydbeck has received his title in Civil engineer from Clarkson College, and his master’s degree in Civil Engineer in Wheaton College, Gordon-Conwell Theological Seminary, and the catholic university of Quito. He has a title of ´´Professional Engineer´´ in Massachusetts in the United States and is a member of American Society of Civil Engineers, American Water Works Association, and Civil Engineer School of Pichincha.

In his role as Assistant Executive Director, Rod will help to support operations in the FIEA Bolivian office, coordinate and develop enhanced partnerships with other NGOs, promote awareness of EIA’s programs, and explore opportunities to expand operations to other countries. 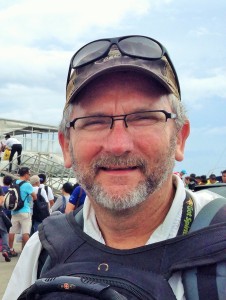 We are proud to announce that former EIA intern Patrick Mette has won the Student Founders Award through Engineers Without Borders-USA, one of our partner organizations. Patrick interned for our La Paz office in 2014. Click here to read more about Patrick and the award. 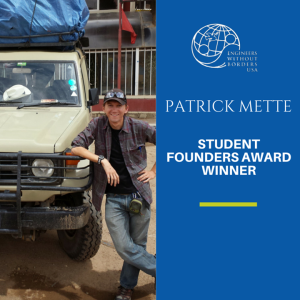