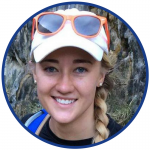 Kacie grew up in the heartland of America. Despite the scenic vistas of corn and cows as far as the eye could see, she yearned to take in other sights as she set out on her own: filled to the brim with grand, if vague, aspirations for the future.

While at the Colorado School of Mines she stumbled into her first bridge project in her quest to set foot in all corners of the world. Upon completion of this structure, she found herself imbued with a particular sense of purpose after witnessing the tangible way engineering could improve human life. She returned infected with a bug for international development that she could never seem to shake.

In the subsequent years working as a young engineer, she served on the Bridges to Prosperity (B2P) University Program Ambassador Team in her spare time before eventually joining the B2P Board of Directors. Whilst she gained insight into the operation, challenges, and opportunities for B2P as an organization, she also grew increasingly restless from sitting on the sidelines away from the action in the field. So, she did the only logical thing one can do in such a situation: she quit her job, packed up a suitcase, and moved to Panama. She spent a year happily fighting off the scorpions, snakes, and humidity alongside the B2P Panama crew and has now transitioned to providing access for isolated communities through pedestrian bridge construction in the Andes as the EIA Bolivia Bridge Program Manager.

In her free time, Kacie enjoys hacking her way through Spanish, hitting the beach, and taking in a nice dystopian fiction to take her mind off her troubles.