Legend says that in an abandoned mine entrance,  in a mountain in Oruro, lived a thief named Anselmo Selarmino (Nina Nina or Chiru Chiru) who stole from the wealthy to distribute among the poor. In one of his nights out he was mortally wounded by a worker whom he intended to rob.

In his agony, he was taken by a virginal woman to his home in the mine. The next day, the miners where shocked to find the beautiful image of the Virgen de la Candelaria guarding the bed of the poor dead thief.

The miners, at the discovery of the Virgin, decided to reverence her for three days a year in February, wearing devil disguises, because the devil, for the Aymara culture, is the watchman of inner earth.

Devil miners, motivated by the generosity and grace of the Virgin of the mine, begin at the mines and parade through town bearing gifts of silver, candles and religious ornaments to statue of the Virgin, and imbibe in food and beverages.

This was how the first devotional fraternities were born by the humblest and poorest citizens of the city: Troops of Devils, Morenos and Tobas.

By 1940, many merchants, teachers, and bankers joined the festival and it grew to be the biggest, wildest party in Bolivia. 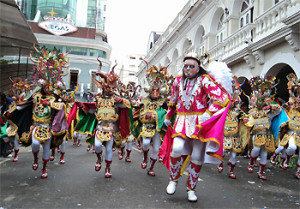 Many tourists, foreign and domestic arrived the night before and many others are on their way from every corner of Bolivia.

In a few hours the city will be filled with thousands of dancers with stunning costumes, majestic masks and rhythms and the energy of The Andes.

The city of the Chiru Chiru, the thief, his legacy will be remembered for next three days with joy and dancing and celebration.