What happens when a newly completed water system breaks down? For EIA and our partner EWB-S&T, we ‘figure it out’!

Tacachia has approximately 90 residents whose only water source comes from the Chacajawira River. In 2014, the community, EWB-S&T and EIA built a water distribution system which served each home. However, the river water they were collecting needed filtration. The partners decided to collect water from a spring which was over 2kms away.

The community, EWB-S&T and EIA developed a plan that the 2015 work trip would dig trenches and install pipes from the collection pool to the tank location. They would install a large water tank and connect the pipeline and water distribution system to the tank. The water tank will collect water overnight to provide increased amounts of water during the day. This is particularly important during the ‘dry season’ when the spring produces significantly less water.

Carlos Ernesto Aguillera, EIA Project Manager, arrived in Tacachia the week before the team with a truckload of pipe, the water tank and all of the connections. He made sure the community knew what the materials were for, and that they were securely cared for by community elders.

most of the pipe was gone!”

“It was a great deal and we were overjoyed” said Dr. Mark Fitch, Mentor for EWB-S&T. “It means that they knew how to put in the pipe, and therefore they know how to maintain it. And there was a general worry that we would have the time to build a 2km pipeline while the team was there. And lo and behold the whole thing was built before we got there!” 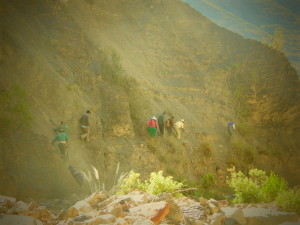 Additional trenching was necessary along a treacherous section of the bank of the river. Community members volunteered to construct it so as not put the students at risk. “They clung on to vines and roots protruding from the face of the embankment as if they were repelling and built a path wide enough for the pipe” Fitch said. “It was amazing to watch them.” 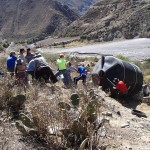 The community and team leveled and compressed the dirt foundation for the tank on a hill overlooking the village. They pushed and pulled the tank to its location, made the connections and the water quickly filled the tank. Everything was completed and everyone was happy. But this is Bolivia, and things go wrong.

Either the weight of the tank caused it to shift, twisting the connections and creating leaks, or a small leak developed first and it eroded the foundation causing the tank to shift. Whichever, by December the system was broken and not working. But the community knew to contact the EIA offices in La Paz. Ernesto went out to Tacachia and realized what had happened.

Using a little engineering creativity, he and the community bypassed the tank and connected the pipeline directly into the water system as a temporary fix. There is plenty of water during the rainy season. When EWB-S&T returns in 2016, they will reset and connect the tank so that it will be prepared to work during the dry season.

The Tacachia project is moving from the implementation into the sustainability phase this year. EIA will stay in contact with the community and make sure all works well.

And EWB-S&T? Dr. Fitch: “We’re already working on a 502 for our next project with EIA in Bolivia!”