Engineers in Action > Our Story > Board of Directors > A J Voth 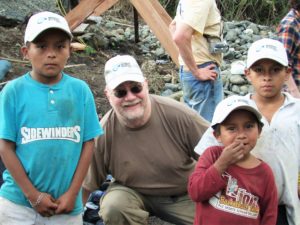 A. J. received a B. S. in Mechanical Engineering from the University of Illinois Chicago. He spent 30 years working in manufacturing and product development in the plastics industry. He spent most of his career working for Steiner Systems in the Chicago area. In 2005, A. J. took an early retirement and became a charter member of the Chicagoland Professionals Chapter of Engineers Without Borders-USA. He has volunteered on projects in Mexico, Guatemala, Honduras and El Salvador. During that time he has participated in three bridge projects, numerous water supply and distribution projects and several sanitation projects.

A. J. recognized that while most projects were successful from a technical standpoint, there was much more that could be done to empower communities and local engineers within the countries where he worked. He was introduced to the EIA community development model in 2015 and quickly realized that the model provided many of the missing pieces that a more holistic development project required. A. J. joined the EIA Board of Directors later that year. He currently serves on the Board as Secretary.

A. J. and his wife Lois are both retired and live in Saint Charles, IL. with their two dogs. A. J. is active in the Saint Charles Breakfast Rotary Club and serves as the International Service Chair. Due to his affiliation with Rotary, he and Lois have had the opportunity to travel and visit some of the sites where he has worked. He has had the opportunity to travel to Bolivia and to meet the staff of FIEA, as time and opportunity permit, he plans to travel back. In the meantime he fully embraces the EIA development model and firmly believes it needs to spread beyond the borders of Bolivia.